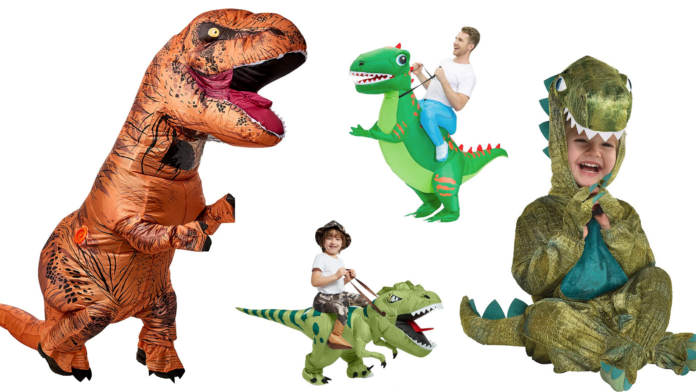 For some reason the dinosaur costume has been the protagonist of many viral videos on social networks in recent months. Surely this will be the most popular costume for the upcoming Halloween season as it is very fashionable among children, teenagers and adults.

The idea of dressing up as a dinosaur at birthday parties, weddings and events has been a sensation during the last few months and it is easy to see it on social networks, especially on Tik Tok. And it is fun to see a dinosaur dancing and enjoying a party.

Many stores have incorporated the dinosaur costume in their catalogs due to the great popularity it has had lately. Although it is not really known who came up with the idea or created this costume, it is certainly one of the costumes that is trending at the moment.

The amount of people dressing up as dinosaurs on networks like Instagram and Tik Tok is impressive. Not only is it very common to see it at parties and celebrations, but also in the funniest situations.

And apparently it is no longer necessary to wait for Halloween to wear a dinosaur costume, the virality of this character has even transcended traditions, so it is common to find someone wearing this costume at any event.

However, in these videos you can always see people in very funny situations, such as dancing, falling, partying and even scaring others. Something that has become fun for those wearing the costume.

Some wear a more realistic dinosaur costume, others wear funnier ones to make people laugh, and they have even incorporated sounds to make the experience more fun.

If there is one thing that made dinosaurs popular again, it is the iconic Jurassic Park movies, which have stuck in the minds of adults, sparking the interest of their fans not only to buy their merchandise but also to learn about dinosaurs.

In the case of the Jurassic World movies, inspired by the first ones, they have sparked the same interest in the new generations who have discovered the world of dinosaurs and have even incorporated it into collectibles, among those, the fun dinosaur costume.

Popular among children and adults

Wearing costumes is no longer just for children, adults also enjoy dressing up and undoubtedly the dinosaur costume is one of the favorites of the moment.

During the pandemic, it was even possible to see many adults wearing this costume as protection from the virus, which caused a lot of fun among the audience. There are hundreds of videos of adults disguised as dinosaurs walking down the street as a way to go out and at the same time protect themselves from the contagion with this peculiar costume.

As you can see the dinosaur costume is one of the most purchased of the season, so if you want to be part of what is in trend, it is worth considering this option to be the coolest of the party.

How Do Super Quiet Generators Work?